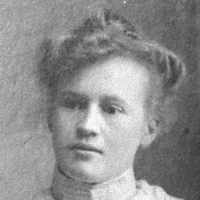 The Life of Anna Christinia Andrea

When Anna Christinia Andrea Andersen was born on 14 August 1885, in Svendborg, Sankt Nikolaj, Svendborg, Denmark, her father, Andreas Emil Andersen, was 27 and her mother, Christine Petrea Margretha Brandt, was 26. She married Jens Christian Fonnesbeck on 8 March 1904, in Copenhagen, Copenhagen, Denmark. They were the parents of at least 4 sons and 3 daughters. She died on 7 February 1940, in Logan, Cache, Utah, United States, at the age of 54, and was buried in Logan Cemetery, Logan, Cache, Utah, United States.

Put your face in a costume from Anna Christinia Andrea's homelands.

The Logan Temple Barn was built on the edge of the Logan temple property to house the animals belonging to the builders of the temple. It was one of only two stone barns built in Cache Valley. These barns became obsolete during the rise of the automobile era. The building and the land it was on was sold in 1919 and became an automobile repair shop. It was placed on the National Register of Historic Places on December 19, 1985, and is still standing today.
1900 · Gold for Cash!