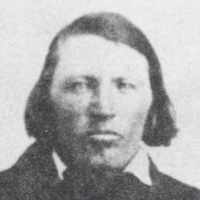 When Peter Yorganson was born on 15 February 1835, in Blentarp, Malmöhus, Sweden, his father, Sören Jöransson, was 26 and his mother, Karna Nilsdotter, was 26. He married Elna Pehrsdotter about 1857. They were the parents of at least 2 sons and 1 daughter. He lived in Santaquin, Utah, Utah, United States in 1880. He died on 1 February 1917, in Raymond, Warner, Alberta, Canada, at the age of 81, and was buried in Santaquin City Cemetery, Santaquin, Utah, Utah, United States.

Americanized form of Swedish Jöransson: very rare patronymic from the personal name Jöran, a variant of Göran, Swedish equivalent of George .History: The progenitor of the Yorgasons was Sören Jöransson from Sweden, who settled in UT in the middle of the 19th century. His surname was changed first to Jorgensson and then to Yorgason. One of his two sons had eight wives and more than 20 children.