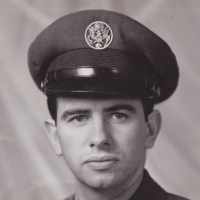 The Life of John Hugh

Put your face in a costume from John Hugh's homelands.

The Ambassador Bridge is a suspension bridge across the Detroit River that connects Detroit to Windsor, Ontario, Canada. Construction finished on November 6 and shortly became the busiest international boarder in North America in terms of trade volume. When it was completed, it was the longest suspended central span bridge in the world and held that record until 1931 with the construction the George Washington Bridge in New York.
1944 · The G.I Bill