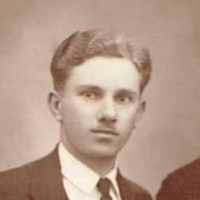 The Life Summary of Arthur Frederick

When Arthur Frederick Angel was born on 8 August 1900, in Southampton, Hampshire, England, United Kingdom, his father, Frederick Angel, was 29 and his mother, Nellie Gulliver, was 27. He married Edna Charlotte Chambers on 16 March 1935, in Evanston, Uinta, Wyoming, United States. They were the parents of at least 1 daughter. He lived in Portswood, Hampshire, England, United Kingdom in 1901. He died on 7 August 1964, in Salt Lake City, Salt Lake, Utah, United States, at the age of 63, and was buried in Holladay, Salt Lake, Utah, United States.

Put your face in a costume from Arthur Frederick's homelands.

Some characteristic forenames: Spanish Jose, Miguel, Carlos, Juan, Manuel, Jorge, Luis, Arturo, Roberto, Jesus, Raul, Salvador.Spanish (Ángel) and Slovenian: from local equivalents of the Latin personal name Angelus, from angelus, Greek angelos ‘messenger, angel’. In early Christian folk belief, angels were so named because they were considered to be messengers sent from God. Compare Spanish Del Angel .English (of Norman origin): from Middle English angel ‘angel’, from Old French angele, from Latin angelus (see above), perhaps applied as a nickname to someone of angelic temperament or appearance or for someone who played the part of an angel in a pageant. In North America, this surname may also be an altered form of any of several cognate European surnames, for example Italian Angelo , Romanian Anghel , Czech Anděl, or Hungarian Angyal.