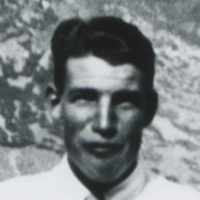 The Life of Wendell Porter

When Wendell Porter Reid was born on 16 January 1922, in Logan, Cache, Utah, United States, his father, Royal Shields Reid, was 33 and his mother, Marcia Esther Porter, was 30. He married Audrey Lena von Marenholtz on 22 August 1946. They were the parents of at least 1 son. He lived in Utah, United States in 1950. He died on 4 May 1973, in Union Springs, Bullock, Alabama, United States, at the age of 51, and was buried in Preston Cemetery, Preston, Franklin, Idaho, United States.

Put your face in a costume from Wendell Porter's homelands.

The Ellen Eccles Theater was originally known as the Capitol Theater and was home to different vaudevilles and operas. The Theater later became solely used for community events and movies. In 1988, popular outcry from the public led to the city of Logan purchasing the theater and a not-for-profit organization was formed to renovate and operate it. Fire destroyed much of the theater's annex in 1990 during a restoration attempt by the city. However, the Theater reopened to a gala performance on January 8, 1993. It is used today for performances of the Utah Festival Opera Company along with the Cache Valley Civic Ballet, Music Theater West, Valley Dance Ensemble, Cache Theater Company, and several Utah State University performing groups.
1937 · The Neutrality Act

Scottish:1. nickname for a person with red hair or a ruddy complexion, from Older Scots reid ‘red’. 2. topographic name for someone who lived in a clearing, from Old English rȳd ‘woodland clearing’. Compare English Read .