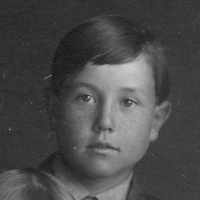 The Life of Kenneth Muir

Put your face in a costume from Kenneth Muir's homelands.

The first of many consumer protection laws which ban foreign and interstate traffic in mislabeled food and drugs. It requires that ingredients be placed on the label.
1923 · The President Dies of a Heart Attack

English: unexplained. Most probably a habitational name from a lost or unidentified place.