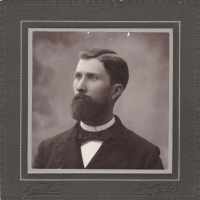 The Life Summary of Franklin Chandler

Put your face in a costume from Franklin Chandler's homelands.

Franklin was born on July 7, 1859 in Kaysville, Davis, Utah. He was the first child born to Samuel Rose Parkinson and Arabella Ann Chandler. They moved to Franklin, Idaho, when he was only a few mo …