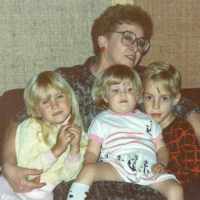 The Life of Maureen

When Maureen Clark was born on 12 April 1929, in Waverley, New South Wales, Australia, her father, Thomas Knowles Clark, was 31 and her mother, Elsie Eveline Hawdon, was 25. She married William Dargie Jamieson Jr on 5 January 1957, in Leeds, Yorkshire, England, United Kingdom. They were the parents of at least 1 son. She died on 10 August 1995, in Sun City Center, Hillsborough, Florida, United States, at the age of 66, and was buried in Sherwood Park, Strathcona County, Alberta, Canada.

Put your face in a costume from Maureen's homelands.

The Star-Spangled Banner is adopted as the national anthem.
1939

Australia joins Britain in declaration of war on Germany.
1947 · The Presidential Succession Act

A Gift of Memory

My Dad, Chris, often told me of a memory that Grandad, Bill, had while growing up. While on my mission in Scotland, I wrote and asked him about it. Grandad remembered being in a room he could not qu …