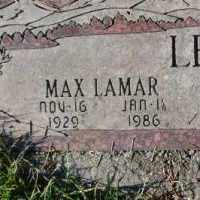 The Life of Max Lamar

Put your face in a costume from Max Lamar's homelands.

The Star-Spangled Banner is adopted as the national anthem.
1934 · The Construction of a Reservoir

In 1933 the funds were obtained to start building a reservoir at the Pineview site. President Roosevelt then authorized the Ogden River Project on November 16, 1935 and was supervised and fully funded under the National Industrial Recovery Act.
1945 · Peace in a Post War World

English: habitational name from any of the numerous places (in at least sixteen counties, but especially Leigh in Lancashire) named either with the nominative case of Old English lēah ‘woodland clearing’ ( see Lee ) or with lēage, a late dative form of this word ( see Lye ).