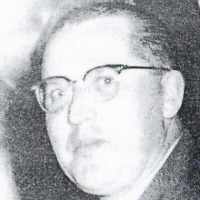 The Life Summary of Willard James

When Willard James Anderson was born on 5 April 1919, in Taber, Alberta, Canada, his father, Niels James Anderson, was 34 and his mother, Emily Lingard, was 36. He married Leora Lou Patterson on 12 June 1940, in Salt Lake City, Salt Lake, Utah, United States. They were the parents of at least 1 daughter. He lived in Lethbridge, Alberta, Canada in 1926. He died on 22 October 2006, in Kelowna, British Columbia, Canada, at the age of 87, and was buried in Kelowna Memorial Park Cemetery, Kelowna, British Columbia, Canada.

Put your face in a costume from Willard James's homelands.