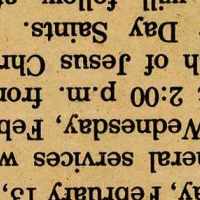 The Life of Richard James

When Richard James Wayling was born on 10 December 1909, in Brandon, Manitoba, Canada, his father, Arthur Wayling, was 39 and his mother, Effie Helena Moore, was 33. He married Vera Isabell Terry on 23 September 1929, in Lethbridge, Alberta, Canada. They were the parents of at least 3 sons. He immigrated to Sweet Grass, Montana, United States in 1938 and lived in Assiniboia, Lake of the Rivers No. 72, Saskatchewan, Canada in 1926. He died on 13 February 1977, in Creston, British Columbia, Canada, at the age of 67, and was buried in Creston, British Columbia, Canada.

Put your face in a costume from Richard James's homelands.

Being modeled after the Boy Scout Association in England, The Boy Scouts of America is a program for young teens to learn traits, life and social skills, and many other things to remind the public about the general act of service and kindness to others.
1910 · Glacier National Park Established

German (Wälling): from the short form of a Germanic personal name formed with walt ‘rule’.