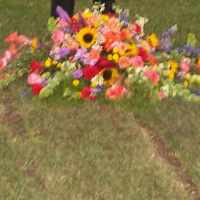 The Life of Martha June

When Martha June Strange was born on 19 January 1935, in Clinton, Custer, Oklahoma, United States, her father, Walter Joseph Strange, was 28 and her mother, Faye Parks, was 24. She married Douglas Raymond Nisewander on 20 April 1952, in Yuma, Yuma, Arizona, United States. They were the parents of at least 1 son. She died on 4 November 2010, at the age of 75, and was buried in Cypress, Orange, California, United States.

Put your face in a costume from Martha June's homelands.

The Neutrality Acts were passed in response to the growing conflicts in Europe and Asia during the time leading up to World War II. The primary purpose was so the US wouldn't engage in any more foreign conflicts. Most of the Acts were repealed in 1941 when the Japanese attacked Pearl Harbor.
1941 · Comanche Code Talkers

Many Native Americans from Oklahoma were once again employed as code talkers during WWII to create a code impenetrable by enemies. Rather than Choctaw, a Comanche-language code was developed. Several of these men were sent to invade Normandy to send messages. None of the men were killed and the Comanche code was never broken.
1955 · The Civil Rights Movement Begins

English: nickname for an incomer, a newcomer to an area, from Middle English strange ‘foreign’ (a reduced form of Old French estrange, Latin extraneus, from extra ‘outside’).