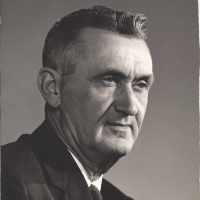 The Life of Eric

When Eric Ward was born on 26 June 1908, in Cramlington, Northumberland, England, United Kingdom, his father, Frank Cartwright Thompson Ward, was 22 and his mother, Margaret Ann Clark, was 26. He married Margaret Gertrude Bates on 16 November 1928, in High River, Calgary, Alberta, Canada. They were the parents of at least 2 sons and 1 daughter. He immigrated to Canada in 1924. He died on 26 November 2003, in Sandy, Salt Lake, Utah, United States, at the age of 95, and was buried in Orem, Utah, Utah, United States.

Put your face in a costume from Eric's homelands.

Until 1909, this natural wonder was not known to the outside world. Two separate exploration parties – one headed by University of Utah Dean Byron Cummings, and another by government surveyor, W.B. Douglass – began searching for the legendary span. Eventually, they combined efforts. Paiute guides Nasja Begay and Jim Mike led an exploration party in the south east corner of Utah, along with trader and explorer John Wetherill. Coming down what is now Bridge Canyon, the party saw Rainbow Bridge for the first time. The next year, President Taft proclaimed the newly found structure a National Monument. Theodore Roosevelt and Zane Grey were among the first visitors to see the Monument. The trail they took is no longer passable for horses but is now a trailhead for hikers that want to visit the bridge. Rainbow Bridge receives thousands of visitors each year but, the National Park Service asks visitors to be respectful of its significance to the people who have long held Rainbow Bridge sacred.
1933 · Sons of Utah Pioneers

Frederic was a much loved baby. The day after Christmas (Boxing Day) his family went to visit relatives. Upon returning home in the evening he was put to bed, seemingly fine. Early in the morning …