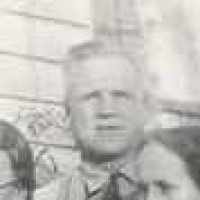 The Life Summary of Clarence Eugene

When Clarence Eugene Allred was born on 24 June 1881, in Lehi, Utah, Utah, United States, his father, James Henry Allred, was 32 and his mother, Kate Markland Jones, was 26. He married Betsy Sophronia Hancock on 18 December 1907, in Salt Lake City, Salt Lake, Utah, United States. He lived in Medicine Hat, Cypress, Alberta, Canada in 1911 and World for about 30 years. He died on 18 January 1961, in Raymond, Warner, Alberta, Canada, at the age of 79, and was buried in Temple Hill Cemetery, Raymond, Warner, Alberta, Canada.

Put your face in a costume from Clarence Eugene's homelands.

The Lehi Co-op Building was built to house the growing needs of the People’s Co-op. The 22,000 square foot, two story, brick building included modern technologies such as electrical wiring and a telephone system. The building was the first in Lehi to have concrete sidewalks installed. Z.C.M.I. closed the Lehi branch in 1937 and the complex was sold.