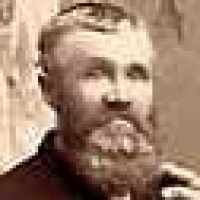 From Covered Wagon to jet plane is travel history of Mrs. Betsy Josephine Nielsen Thornley, 95, who made first trip in covered and will fly to Utah next week by jet. Displaying model plan and memory book is Mrs. Thornley.

WLA Woman Retraces Trek by Byrnice F. Birge At age 14, a young girl left Utah astride a horse and rode beside her family's covered wagon. Now a lovely lady, aged 85, she will return to Utah flying a …