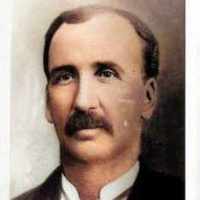 The Life Summary of William Wilkie

When William Wilkie Galbraith was born on 12 May 1838, in Grimsby, Lincolnshire, England, United Kingdom, his father, George Galbraith, was 26 and his mother, Anne Wilkie, was 25. He married Elizabeth Matthews Layton on 11 April 1861, in Salt Lake City, Salt Lake, Utah, United States. They were the parents of at least 6 sons and 2 daughters. He lived in Phillack, Cornwall, England, United Kingdom in 1851. He died on 1 January 1898, in Colonia Díaz, Ascensión, Chihuahua, Mexico, at the age of 59, and was buried in Colonia Diaz Cemetery, Colonia Díaz, Chihuahua, Mexico.

Put your face in a costume from William Wilkie's homelands.

Santa Anna retires to his hacienda and leaves government to Nicolás Bravo.

Triumph of Plan of Ayutla under leadership of Benito Juárez.

Scottish: ethnic name for a Strathclyde Briton, from Gaelic gall Breathnach ‘British foreigner’. Compare Gall .History: This name is first recorded as a surname in the Lennox, a rich agricultural region north of Glasgow under the Campsie Fells, in the 12th century. In early medieval times the region to which Lennox belongs was an independent Welsh-speaking kingdom, with its capital at Dumbarton. It was not integrated into the rest of Scotland until 1124. The first recorded chief of the Galbraiths was Gilchrist ‘the Briton’, living in 1193.

GALBRAITH William Wilkie (b 1838) I would like to make note that William Wilkie Galbraith was called by President Brigham Young of The Church of Jesus Christ of Latter-day Saints on April 22, 1876 to …