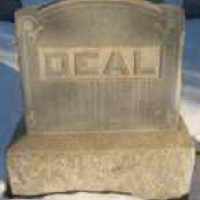 The Life Summary of Daniel Edgar

Put your face in a costume from Daniel Edgar's homelands.

English: habitational name from Deal in Kent, named with Old English dæl ‘(place at) the hollow or valley’.English: alternatively, a variant of Dale 1, a topographic name denoting someone who lived in a valley.Americanized form of German Diehl or Diel .