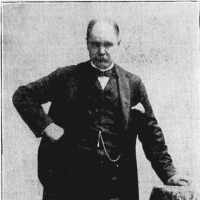 Put your face in a costume from Samuel Harvey Wollerton's homelands.

Probably an altered form of German Reiter or Ritter .