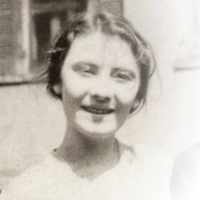 The Life Summary of Genevieve Mae

When Genevieve Mae Pratt was born on 15 March 1909, in Bakersfield, Kern, California, United States, her father, Mathoni Mead Pratt, was 19 and her mother, Genevieve Procter, was 19. She married Lawrence Ritchie Stubbs on 24 April 1931, in Utah, Utah, United States. They were the parents of at least 4 sons and 2 daughters. She lived in Washington, Washington, Utah, United States in 1950. She died on 20 January 1985, in Galeana, Chihuahua, Mexico, at the age of 75, and was buried in Galeana, Chihuahua, Mexico.

Put your face in a costume from Genevieve Mae's homelands.

Mexico's 100 years of independence celebrated. Seventh reelection of Díaz. Madero's Plan of San Luis Potosí. Rebellion breaks out in north and in Puebla.

A film has been complied in honor of Lawrence Ritchie Stubbs legacy.

Send me a message to obtain a private YouTube link to the film.