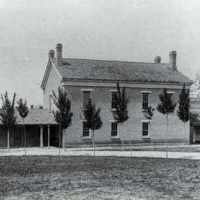 The Life Summary of Franklin Thomas

Put your face in a costume from Franklin Thomas's homelands.

Franklin Thomas & Mary Jane Titcomb Gray Thomas Gray was born December 8, 1851, and his family migrated from England around the time of his birth. His family lived in Lehi. He married Mary in 1874 and …