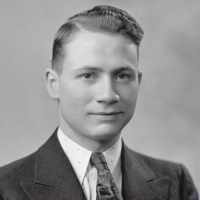 The Life Summary of Fred Alvin

Put your face in a costume from Fred Alvin's homelands.

FRED A. BINGHAM My life began on January 16, 1917 in a home at Wilson Lane (West of Ogden), Utah. At the age of three I moved with my family to a farm in Honeyville, Utah. The farm was an apple orchar …