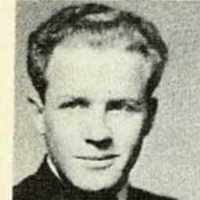 The Life of Eugene Raymond

Put your face in a costume from Eugene Raymond's homelands.

The Prohibition Era. Sale and manufacture of alcoholic liquors outlawed. A mushrooming of illegal drinking joints, home-produced alcohol and gangsterism.
1925

Czech (Riška): variant of Ryška, nickname for someone with red hair, a derivative of Old Czech ryzí ‘red’.