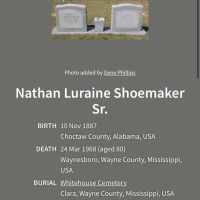 The Life of Nathan Luraine

Put your face in a costume from Nathan Luraine's homelands.

This Act tried to prevent the raising of prices by restricting trade. The purpose of the Act was to preserve a competitive marketplace to protect consumers from abuse.
1895 · Alabama State Flag is Adopted

Alabama adopted its state flag on February 16, 1895. Act 383 of the Alabama state legislature states, “The flag of the State of Alabama shall be a crimson cross of St. Andrew on a field of white.”
1909 · The NAACP is formed

Translation of Dutch Schoemaker or German and Jewish Schumacher .