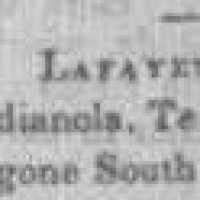 The Life of Lafayette

Put your face in a costume from Lafayette's homelands.

On April 26, 1838, The Lord reveals that the name of His Church should be The Church of Jesus Christ of Latter-day Saints. This revelation was given to the Prophet Joseph Smith, Jr. in Far West, Missouri.
1844 · Lumpkin's Jail