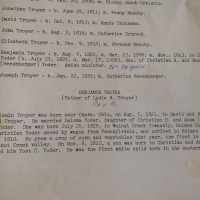 The Life of Benjamin D.

Put your face in a costume from Benjamin D.'s homelands.

1 Altered spelling of German Troier, Treuer, in the south, a topographic name for someone who lived by a cattle track Treyen (from Latin trivium ‘trail’); in the north, from an occupational name from Middle Low German troye ‘jerkin’.2 Dutch (De Troyer): occupational name for a maker of jerkins ( see Troy 6).