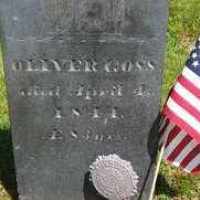 The Life of Oliver

Oliver Goss was born on 22 March 1761, in Shrewsbury, Worcester, Massachusetts Bay Colony, British Colonial America as the son of Goss and Elizabeth Pike. He married Rachel Streeter about 1791. They were the parents of at least 2 sons and 4 daughters. He registered for military service in 1843. He died on 4 April 1844, in Canaan, Essex, Vermont, United States, at the age of 83, and was buried in Canaan, Essex, Vermont, United States.

1 English (chiefly West Country): variant of Gosse .2 German: from the Germanic personal name Gozzo, a short form of the various compound names with the first element gōd ‘good’ or god, got ‘god’.