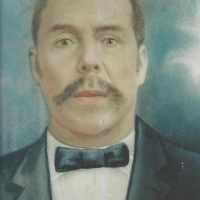 The Life of Alexander Sane

When Alexander Sane Crichton was born on 18 June 1864, in Sataua, Samoa, his father, William Crichton, was 36 and his mother, Uputaua Falemalu Lesa, was 34. He married Fa'aatuatu Fonoti Fa'ase'e about 1888, in Savai'i, Samoa. They were the parents of at least 1 son and 1 daughter. He died on 29 November 1918, in his hometown, at the age of 54, and was buried in Sataua, Samoa.

Put your face in a costume from Alexander Sane's homelands.

Germany annexes Western Samoa, the U.S. takes over eastern Samoa and Britain withdraws its claim to the islands in accordance with treaty between Germany, Britain and the U.S.
1914

Alexander Sane Crichton was born to parents, William Crichton and Uputaua Falemalu on the island of Savaii in Western Samoa on June 18, 1864. The family resided in the village of Sataua wher …

There are no historical documents attached to Alexander Sane.