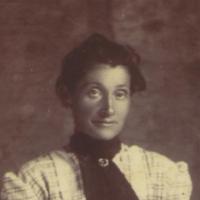 The Life of Adèle Eugenie Caroline

When Adèle Eugenie Caroline Brun was born on 2 December 1865, in Haut-Rhin, Alsace, France, her father, Jean François Brun, was 35 and her mother, Jeanne Françoise Brun, was 33. She married Jules Ferdinand Napoléon Juillard in 1894, in France. They were the parents of at least 1 son and 4 daughters. She died on 23 June 1953, in Charleston, Kanawha, West Virginia, United States, at the age of 87, and was buried in Spring Hill Cemetery, Charleston, Kanawha, West Virginia, United States.

Put your face in a costume from Adèle Eugenie Caroline's homelands.

The first federal law that defined what was citizenship and affirm that all citizens are equally protected by the law. Its main objective was to protect the civil rights of persons of African descent.
1870

Franco-Prussian war resulted in the loss of Alsace and Lorraine and the fall of Napoleon III. Paris Commune (1871).
1889 · World Expo at Paris With the Eiffel Tower