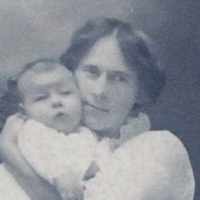 The Life of Louisa Marie

Put your face in a costume from Louisa Marie's homelands.

Paper money had been scarce in Preston until the year 1898. Script currency was used which contained the promise of goods or services rather than paper money. In 1898, script was discontinued and “a lithographed article, much resembling the greenback” was used instead. At first the transition was awkward as nearest bank was located in Logan, Utah. Paper currency became plentiful soon after.
1900 · Gold for Cash!