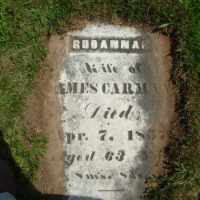 The Life of Rosannah

Ohio was the first state admitted to the Union from the Northwest Territory.
1810 · Change of capital city