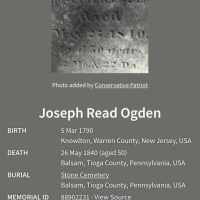 The Life of Joseph Read

Put your face in a costume from Joseph Read's homelands.

The Society for Establishing Useful Manufactures (S.U.M.) was the first large business corporation in the United States. The organization was granted a charter by Governor William Paterson on November 22, 1791. The newly formed town was named Paterson, in honor of the governor.
1804