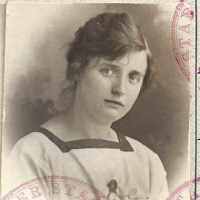 The Life Summary of Gerritdina Hermina

Put your face in a costume from Gerritdina Hermina's homelands.

Chinese: variant Romanization of the surname 鄧, see Deng 1.Chinese: variant Romanization of the surname 丁, see Ding 1.Chinese: possibly also from Taishanese form of the Chinese name 進 (meaning ‘progress’), a monosyllabic personal name or part of a disyllabic personal name of some early Chinese immigrants in the US.