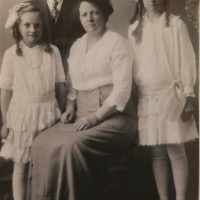 When Sarah McDonald was born on 22 June 1878, in Belfast, Ireland, her father, William John McDonald, was 31 and her mother, Sarah Morrison, was 30. She married John "Jack" Price on 29 July 1901, in Belfast, Ireland. They were the parents of at least 2 sons and 3 daughters. She immigrated to Vermont, United States in 1914 and lived in Antrim, County Antrim, Ireland in 1901 and Brooklyn, Kings, New York, United States in 1930. She died on 18 June 1958, in Pocatello, Bannock, Idaho, United States, at the age of 79, and was buried in Pocatello, Bannock, Idaho, United States.

Garfield was shot twice by Charles J. Guitea at Railroad Station in Washington, D.C. on July 2, 1881. After eleven weeks of intensive and other care Garfield died in Elberon, New Jersey, the second of four presidents to be assassinated, following Abraham Lincoln.
1891 · Lots for sale

The city lots were disposed of at an auction sale, which made way for new houses, commercial buildings and manufacturing plants to be erected and caused an increase of people moving to the region.
1900 · Gold for Cash!

Scottish: Anglicized form of Gaelic Mac Dhomhnuill, a patronymic from the personal name Domhnall, which is composed of the ancient Celtic elements domno- ‘world’ + val- ‘might’, ‘rule’.