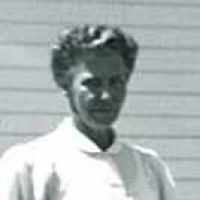 When Thelda Fillerup was born on 1 April 1907, in Díaz, Camargo, Chihuahua, Mexico, her father, Erastus Kruse Fillerup, was 32 and her mother, Lucy Ann Johnson, was 27. She married James A. Mc Kenna in August 0004, in Clark, Nevada, United States. She lived in Idaho Falls, Bonneville, Idaho, United States in 1920. She died on 6 March 1976, in Sonoma, California, United States, at the age of 68.

Put your face in a costume from Thelda's homelands.

Díaz states his intention of not seeking reelection in interview. Francisco I. Madero publishes The Presidential Succession of 1910 .
1915 · Arrowrock Dam built