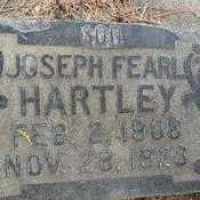 The Life of Joseph Fearl

Put your face in a costume from Joseph Fearl's homelands.

A monument honoring the Provo pioneers and Indian war veterans was dedicated on July 24, 1909, as Pioneer Park opened to the public.
1915 · Dinosaur National Monument

1 English (mainly northern): habitational name from any of various places so called. Several, in particular those in Hampshire, Kent, and Devon, are named from Old English heorot ‘hart’, ‘stag’ + lēah ‘wood’, ‘clearing’. One in Northumberland has as the second element Old English hlāw ‘hill’, and one in Cumbria contains Old English clā ‘claw’, in the sense of a tongue of land between two streams, + probably heard ‘hard’. The surname is widely distributed, but most common in Yorkshire, where it arose from a place near Haworth, West Yorkshire, also named with Old English heorot + lēah. As a Scottish name, it comes from the Cumbrian Hartley (see forebears note).2 Irish: shortened Anglicized form of or surname adopted as equivalent of Gaelic Ó hArtghaile ‘descendant of Artghal’, a personal name composed of the elements Art ‘bear’, ‘hero’ + gal ‘valor’.