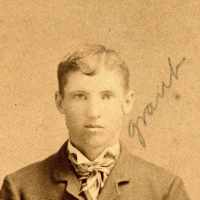 The Life of William Grant

Put your face in a costume from William Grant's homelands.

Grandma Covert was very neat. She always wore a black skirt and black silk blouse for good. She had a watch on a chain that she stuck in her belt. Around home she wore a print dress and a long wais …