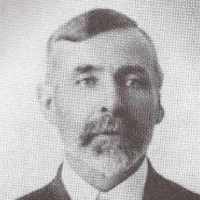 The Life of John Napier

Put your face in a costume from John Napier's homelands.

The Post Office was established in 1870.
1881 · The Assassination of James Garfield