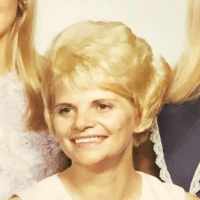 The Life of Noreen Marcella

When Noreen Marcella Schatz was born on 1 August 1933, in Missoula, Montana, United States, her father, Herbert Hugo Schatz, was 19 and her mother, Marcella Catherine Lockridge, was 19. She married James Bruce Ward on 1 May 1982, in San Jose, Santa Clara, California, United States. She died on 20 December 2007, in Mesa, Maricopa, Arizona, United States, at the age of 74.

Put your face in a costume from Noreen Marcella's homelands.

In 1950, Great Falls, Montana replaced Butte, Montana as the largest city
1953 · The Better Community Council is Organized to Fight Discrimination

1 German and Jewish (Ashkenazic): metonymic occupational name for a treasurer, from German Schatz ‘treasure’, Middle High German scha(t)z. It may also have been a nickname for a rich man (or ironically for a miser), or else for a well-liked person or a ladies’ favorite, from the use of the vocabulary word as a term of endearment. As a Jewish name it is mainly of ornamental origin.2 Jewish (Ashkenazic): occupational name from an acronym of the Hebrew phrase SHeliach-TSibur ‘emissary of the congregation’, an epithet of the cantor.

We lived in the Phoenix valley when Aunt Noreen and Uncle Jim lived in Mesa, Arizona. On one of the last visits we had, I ask Uncle Jim to tell me his life story and I wrote it down. I was born on Ap …