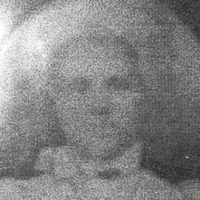 The Life of Frances Lucinda

When Frances Lucinda Phillips was born in 1887, in Arkansas, United States, her father, Marshall Tipton Phillips, was 28 and her mother, Emma Catherine Reynolds, was 25. She had at least 4 sons and 4 daughters with Eugene G Morgan. She lived in Choctaw Nation, Indian Territory, United States in 1900. She died in 1924, in Milton, Le Flore, Oklahoma, United States, at the age of 37.

Put your face in a costume from Frances Lucinda's homelands.

This Act tried to prevent the raising of prices by restricting trade. The purpose of the Act was to preserve a competitive marketplace to protect consumers from abuse.
1898 · War with the Spanish