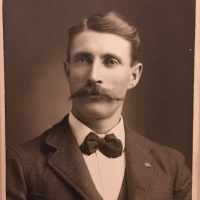 The Life of Robert Percy

Put your face in a costume from Robert Percy's homelands.

School attendance became compulsory from ages five to ten on August 2, 1880.
1898 · War with the Spanish

Our Daddy Our Daddy‘s gone beyond life’s sea, his soul will rest eternally where Billows neither roll nor roar, nor wind nor waves whip that far shore. No troubles rise beneath his breast, His he …