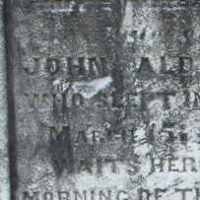 With the Aftermath of the Napoleonic Wars the global market for trade was down. During this time, America had its first financial crisis and it lasted for only two years.
1824 · """Mary Randolph Publishes """"The Virginia Housewife"""""""

“The Virginia Housewife” was published by Mary Randolph. It was the first cookbook published in America.
1844 · Lumpkin's Jail

English:1. variant of Aldrich . 2. habitational name from a place in the West Midlands called Aldridge; it is recorded in Domesday Book as Alrewic, from Old English alor ‘alder’ + wīc ‘dwelling’, ‘farmstead’.