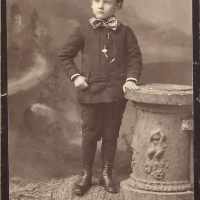 The Life Summary of Thomas George

Put your face in a costume from Thomas George's homelands.

The Secrete Service Headquarters had been in NYC for four years. Finally in 1874, it returns to Washington D.C.

Thomas George Lewis was four years old when his family left Bristol, traveled to Liverpool and sailed in May of 1856 on the sailing vessel “Thornton”, which carried over 800 passengers and was upwar …