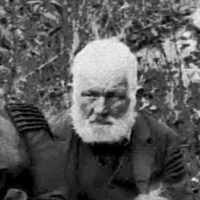 The Life of William Peter

When William Peter Briggs was born on 23 November 1826, in Norwich, Norfolk, England, United Kingdom, his father, John Briggs, was 39 and his mother, Sarah Watts, was 32. He married Bridget Gallagher on 4 September 1848. They were the parents of at least 6 sons and 5 daughters. He died on 18 December 1906, in Hobart, Tasmania, Australia, at the age of 80, and was buried in Hobart, Tasmania, Australia.

Put your face in a costume from William Peter's homelands.

Australia is claimed as British territory.
1830