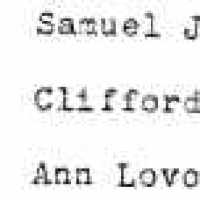 The Life Summary of Clifford Alonzo

Put your face in a costume from Clifford Alonzo's homelands.

Altered form of French Bondurand: nickname from bon ‘good’ + the personal name Durand , literally ‘good Durand’. Compare Bundren and Bundrant .History: Jean-Pierre Bondurand from Génolhac in Gard, France, married Anne Faure in Manakin, VA, c. 1708. His name is listed (in the form Bondurant) in the (US) National Huguenot Society's register of qualified Huguenot ancestors and also in the similar register of the Huguenot Society of America.