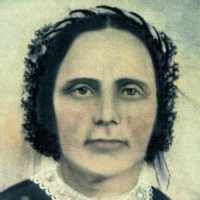 When Amelia Hardesty was born on 24 July 1824, in Holbeck, Yorkshire, England, United Kingdom, her father, Charles Hardisty, was 28 and her mother, Ann Lloyd, was 30. She married James Clarke in 1850, in Leeds, Yorkshire, England. They were the parents of at least 2 sons and 1 daughter. She died on 18 January 1877, in American Fork, Utah, Utah, United States, at the age of 52, and was buried in American Fork Cemetery, American Fork, Utah, Utah, United States.

On January 14, 1875, the American Fork Ward Relief Society welcomed in the new year by meeting together at Sister Jackson's house to speak concerning the welfare of their souls. Mary Hindley, the soc …