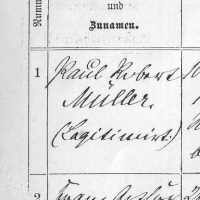 The Life of Paul Frank

When Paul Frank Miller was born on 10 September 1887, in Germany, his father, Robert Frank Miller, was 20 and his mother, Minna Watsdorf, was 20. He married Anna Marie Qualey on 14 November 1919, in Stevens, Washington, United States. He registered for military service in 1919. He died on 28 April 1974, in Spokane, Spokane, Washington, United States, at the age of 86.

Put your face in a costume from Paul Frank's homelands.