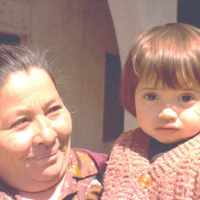 The Life of Margarita Meza

When Margarita Meza Castillo was born on 22 February 1929, in Villa Juárez, San Luis Potosí, Mexico, her father, Isabel Meza Gonzalez, was 39 and her mother, Antonia Castillo Juaréz, was 28. She had at least 2 sons with Elias Rangel Perez. She died on 24 March 1995, in Chicago, Cook, Illinois, United States, at the age of 66, and was buried in Chicago, Cook, Illinois, United States.

Put your face in a costume from Margarita Meza's homelands.

1930 · The First Planetarium in the Western Hemisphere

The Adler Planetarium was founded by Max Adler as a public museum dedicated to the study of astronomy and astrophysics. It was the first planetarium in the United States and is part of Chicago's Museum Campus. The Adler is home to three theaters, a space science exhibition, and a collection of scientific instruments and printed materials. The Adler also is home to one of the only research-active, public urban observatories.
1931

Spanish: from castillo ‘castle’, ‘fortified building’ (Latin castellum), a habitational name from any of numerous places so named or named with this word.