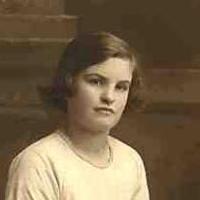 The Life of Joan Kathleen

Put your face in a costume from Joan Kathleen's homelands.

After Germany declared war Russia, Britain entered The Great War and declared war on Germany on August 4, 1914. The war ended on November 11, 1918, as Germany signed an armistice that brought fighting to a halt.
1939 · Britain Enters World War II

I remember my father, George Lowman, as a very kind and loving family man. He was not as appreciated as he truly deserved. Unfortunately, children tend to take everything for granted. George Lowman …