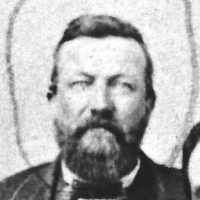 When James Hague was born on 25 April 1823, in Dronfield, Derbyshire, England, United Kingdom, his father, Benjamin Hague, was 34 and his mother, Elizabeth Fearn, was 32. He married Sarah Ann Beaver in 1842, in England, United Kingdom. They were the parents of at least 7 sons and 2 daughters. In 1870, at the age of 47, his occupation is listed as gunsmith in Salt Lake City, Salt Lake, Utah, United States. He died on 19 October 1870, in Atlantic Ocean, at the age of 47, and was buried in County Offaly, Ireland.

Who is in this Story, Why they are tagged. Catherine Salisbury Meldrum Niece and Author of 1/2 of this story David J. Michael, Husband Edgar, Joseph, John, Harold, Daniel, Lillian and David O Siblin …