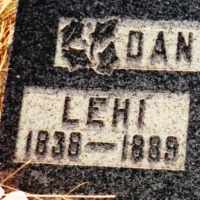 The Life Summary of Lehi

Put your face in a costume from Lehi's homelands.

LEHI and his oldest son, WILLIAM H., both worked for the railroad. William fell from a train and both his legs were cut off. He and Lehi are buried in the Echo Cemetery, Summit County, Utah. The pr …